Will Drinking During Recovery Increase Swelling?

Drinking will increase swelling after surgery, so it’s important to avoid it for at least 2-3 weeks immediately following the procedure. Reducing swelling is important during the recovery phase mainly because it interferes with healing, but it’s our goal to get our patients feeling and looking their best as soon as possible. 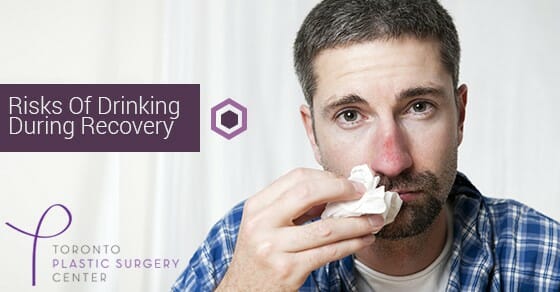 Some postoperative swelling is normal

Swelling is your body’s way of responding to surgery. Your body retains more water in the affected area, leading to the body to expand under the skin so that it looks bigger and feels different than it usually does. There may also be discolouration from bruising, causing the skin to appear blue, purple, or black.

Looking closer at the site of swelling, it’s actually an inflammatory response that directs an increased population of white blood cells to flood the area, in addition to exposing the area to greater blood flow. Also, certain chemicals will be released in order to indicate to the nerves nearby that the area operated on needs attention. This is why you feel pain when your body swells.

Alcohol contains chemicals that cause an effect on your body called vasodilation. The muscles surrounding the walls of the arteries control blood pressure and blood flow. Vasodilators like alcohol restrict the muscles from tightening, meaning the diameter of the arteries is allowed to expand. Larger blood vessels result in greater fluid accumulation at the site of swelling.

Tip: alcohol is particularly bad for patients who undergo rhinoplasty.

Other side effects to drinking after surgery

Drinking alcohol can increase how much pain is experienced during the recovery period and it may encourage the area to bleed. You may also be taking medications to help with pain, and as we all know, it’s dangerous to mix medicine with alcohol due to the potential for interaction. Drinking can interfere with sedative and anaesthetic agents, so make sure you haven’t had anything to drink prior to surgery either.

The first 2 to 3 weeks after surgery is an important period of time where you should also avoid certain other activities such as smoking and over-exertion. However, after a few months it is safe to start consuming alcohol in small amounts, and it will have little effect on the healing process. During your consultation with your Toronto plastic surgeon, you will go over the appropriate guidelines to make sure you will be doing your best.