As one of the most highly sought cosmetic surgical procedures in the world, it’s no surprise that there is a lot of information – and misinformation – about breast implants circling the Internet. 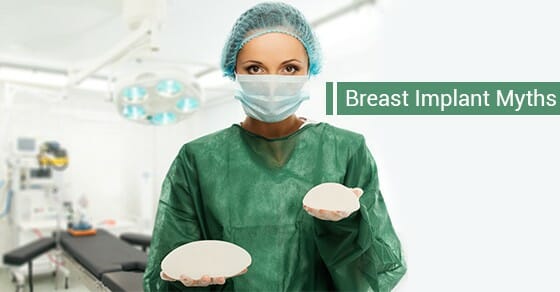 The growth in popularity and awareness of the procedure has helped increase public acceptance of such cosmetic treatments, but has done little to decrease the number of myths and misconceptions.

In order for patients to come to informed decisions, it’s essential to dispel these myths and provide them with the information and understanding they need to ensure satisfaction with the results. Today we take a look at some of the most common myths surrounding this popular procedure.

Myth #1: Ruptures will cause silicone to leak throughout the body.

While this may have been true of older implant designs, new silicone implants are made of a gummy like material that cannot leak into surrounding tissue. Even when cut in half, these implants cannot leak and ruptures are much more rare nowadays thanks to the removal of older models from the market in the early 1990s.

Myth #2: Botox can be used as an alternative method of lifting the breasts.

Despite a common online scam stating that Botox can lift the breasts enough to provide a more youthful appearance, there have been no proper studies performed that show Botox is an effective option for breast augmentation. Physiologically illogical, this procedure has not been approved and is extremely unlikely to produce the desired results.

Myth #3: Breast implants must be replaced every 10 years.

While it is true that many women who have undergone transplant surgery later decide to upgrade or alter their implants in some way, this is not because the implant needs replacing, but rather due to the continued effects of aging.

As long as the implants remain supple, soft, and pleasing there is no reason to change them and many women have had the same set of implants for up to 30 years or more.

Myth #4: Breast augmentation will change the position of the nipple and areola.

Breast augmentation and breast lifts are two separate procedures that can be used in conjunction to achieve the most flattering results for some patients. Augmentation alone will not change the positioning of the nipple or areola as it is used to increase size and improve shape. Breast lifts are commonly performed later in life or as part of a mommy makeover and involve lifting the tissues to provide a more youthful appearance.

Myth #5: Silicone implants can increase the risk of autoimmune diseases.